A tasting of nine “natural” root beers yields surprising results By Lou Bendrick on Jul 15, 2009 grist.org
“..Today, your beverage aisle might showcase retro, handcrafted “root sodas” with exotic spices, certified organic root beers, a green-tea root beer, and a diet root beer spiked with an eco-sounding plant-based sweetener. You might even be able to find a local root beer with an ostensibly lighter carbon footprint. OK, so what’s a green-minded, confused consumer like you to do, short of licking your cracked lips, throwing up your hands, and heading to the nearest vending machine?..

Maine Root
Ingredients: Carbonated pure water, organic fair trade–certified cane juice and spices (according to the website, the company uses extracts of wintergreen, clove, and anise).
Eco-claim: Organic fair trade–certified cane juice (though not USDA organic certified). Also, if you happen to live near Portland, Maine, you can take a small comfort in knowing that this root beer will be delivered via a biodiesel VW Jetta.
Price: $7.16 / four-pack of glass bottles..

…The bottom line: Whole Foods 365 Everyday Value Brand root beer tastes great and doesn’t contain HFCS. It may not be earnestly green, handcrafted, exotic, or zero-cal, but its low price means that you might be able to afford to top if off with a big dollop of really yummy organic vanilla ice cream. Enjoy!”

8 Natural Sodas That Are Way Healthier Than Cola By Emily Main January 14, 2016 rodalesorganiclife.com
Satisfy your sweet tooth with fizzy beverages made from real fruit and sweeteners.

Also from the purists at Reed’s, Virgil’s Root Beer is root beer made the way nature intended, by brewing a combination of herbs and spices naturally, rather than concocting a chemistry experiment of artificial flavorings, dyes, and additives. The ingredients list reads like the gatherings of a world traveler–anise from Spain, vanilla from Madagascar, molasses from the U.S., and balsam oil from Peru–and will get you off that artificial canned stuff forever. However, good as it is, this soda won’t win you any favors with your waistline. At 160 calories per serving and 42 grams of sugar, make it a weekly indulgence…”

When it comes to making all-natural soda, this isn’t a new trend for the folks at Blue Sky Soda. Since 1980, the California-based company has been swapping stevia into their beverages, and without preservatives or artificial colors.

Ridiculously Easy Low Carb Root Beer Float asweetlife.org
“..And these days, there are plenty of “diet” root beers to choose from, many of which are made with healthier, all-natural sweeteners. So raise a frosty glass of low carb root beer float, because it won’t raise your blood sugar…’

Is Diet Soda Safe for Diabetes? healthline.com
“Managing blood sugar levels is an everyday goal for people with type 1 and type 2 diabetes. While eating sugar doesn’t cause either type of diabetes, keeping tabs on carbohydrate and sugar intake is an important part of managing both types of diabetes. Eating healthfully can also reduce your risk for developing type 2 diabetes…

Drinking sugary drinks is also a risk factor for developing type 2 diabetes. If you are working to keep your blood sugar in check or manage your weight, you might choose diet soda. Low in calories and sugar, diet sodas appear to be a good alternative to sugary drinks. Diet coke and A&W’s diet root beer, for example, claim to be entirely sugar-free. Unfortunately, even though they contain no actual sugar, they are loaded with artificial sweeteners and other unhealthy additives. …”

In the experiment, researchers discovered that artificial sweeteners can trigger sweet receptors in the stomach. This leads to an increase in insulin and lowered blood sugar. The stomach was essentially treating the artificial sweetener like real sugar, causing a spike in insulin. Researchers found this concerning but also said the spike in insulin wouldn’t likely cause clinical hypoglycemia, a risk for people on certain diabetes medications….”

And herein lies the danger of the blind taste-test: Sometimes eliminating bias leads to exposing yourself as the sort of cheap pig who shills for the Whole Foods house brand. But here we are, and I can’t deny that the 365 uses cane sugar and “natural root beer flavor” to produce a smooth and almost subtle root beer with vanilla and sweet spice flavors that will complement, rather than debase or overwhelm, your rum and ice cream…”

Anise: Imparts a licorice flavor.
Sarsaparilla: When soda production began in the last 1800s, sarsaparilla claimed to have health-giving properties. The root lends a very bitter flavor.
Birch oil: Made from the sap of birch trees, it gives a flavor similar to teaberry.
Wintergreen: Just what you’re probably thinking of — the minty flavor often found in chewing gum.
Sassafras: Coming from the sassafras tree, this imparts a deep, bitter flavor.
Vanilla extract (Bourbon or Tahitian): This gives root beer its distinctive creaminess.

Top Ten Best Root Beers thetoptens.com
“..IBC is by far my favorite root beer. I started drinking it about 10 years ago. Initially it was raised letters on the bottle that attracted me to give it a try. Now I have my local store order it by the case. I mostly drink diet root beer as I feel regular root beers are too sweet and creamy (go figure). IBC has a great balance of flavors with a strong bite. If I had to break it down I would say anise, molasses and vanilla. Unfortunately they’ve gone from 6 pack to 4 pack. One benefit was going from corn syrup to real sugar, but as for the diet they’ve said at IBC they’ve made no change. I can taste a change, it is a little more mild than the previous version. One question for IBC, if they’ve made no change to the diet version then why are the sodium numbers on the back lower than the 6 pack version of the IBC Diet? It is still my favorite with Boylan diet being second. I know lots of people say Virgil’s is has the best flavor with its dominant nutmeg. Although I do agree it has a …more..”

These Are The Healthiest And Least Healthiest Soda You Can Drink! October 22, 2015 10:13 AM cbslocal.com

Here are the ten LEAST-healthy sodas . . .

1. Grape-flavored Fanta. One can has 180 calories!

10. Surge, which was gone for over a decade until Coca-Cola started selling it again last year…’

Driftwood Draft Root Beer fitgersbrewhouse.com
brews, Growler, On Tap
“We brew this truly old fashioned soda one small batch at a time with pure Lake Superior Water. This Root Beer has the rich, creamy flavor that only comes from using pure Wisconsin honey direct from the combs. The dark, honeyed brew will build a delicious, frothy head when poured.”

“..The name 1919 Classic American Draft Root Beer signifies the year when hundreds of breweries were faced with the prospect of closing because of Prohibition (1919-1933).

In order to keep their breweries open, several resourceful Brewmasters chose to make near beer, elixirs, and sodas! This practice was continued only until Prohibition was repealed, and breweries went back to making beer.

1919 is brewed in small batches with only the finest ingredients…real granulated sugar ~ the sweetener of choice during the prohibition era ~ and real vanilla. Our unique recipe and these choice ingredients make 1919 the creamiest, full bodied, draft root beer available. In addition, 1919 is alcohol-free and contains no corn syrup, gluten, or caffeine.
..

Question: Does 1919 contain corn syrup? My child is allergic to corn syrup.

Approximately 98% of sodas are made with corn syrup, which is much easier to use and less expensive than granulated sugar. Corn syrup was not developed until the 1970’s and true to our name and the era 1919 represents, we continue to use granulated sugar. Sugar is what gives 1919 the depth and consistency that is unique in the industry. It also makes 1919 taste so good!..”

-Choose your own toppings special: “Chicken w/spinach and pineapple”

*thanks Paul (treated me) 🙂 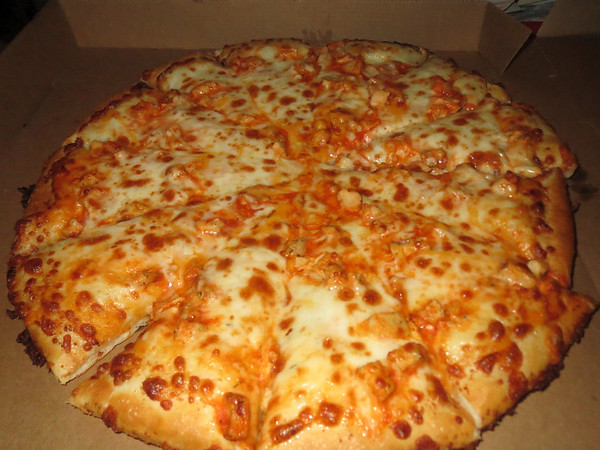 What’s your favorite type of pizza in Morris?